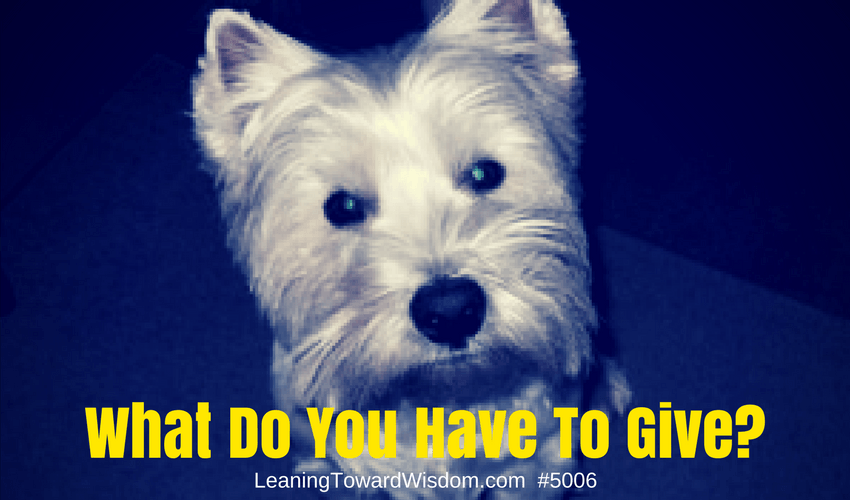 His name was Rocky. Like all Westies (he was a White West Highland Terrier; commonly called Westies) he’d cock his head when he was puzzled. You may be puzzled, too. I often am. Which is why I’m always asking questions. And I’m great at it – asking questions, that is. By the way, I lost Rocky a few years ago and he gave me quite a lot. I gave him a lot, too. In a word, love!

Today’s question is pretty stinking ancient, but it’s not as ancient as another question that is asked more, “What do you have to give me?” Flip it and let’s not think about ourselves from a “getting” perspective but from a “giving” perspective.

But let’s start with keeping score. I’m competitive, but I’m not a scorekeeper. I’m am blessed. Grateful.

I’m a baby boomer, born in an old-school era. Where kids could ride in the back of a pickup truck through town. And not be pulled over by cops.

I’m an American. A country with tremendous opportunities and freedoms.

I’m blessed with a ton of empathy. I was emotionally intelligent before I even knew that was a thing.

I’m an INFJ. Highly intuitive. Introversion (I), Intuition (N), Feeling (F), Judgment (J) — and it’s a blessing. I own it. Long ago I learned I might as well because I’m unable to change it.

I’m candid. And that’s a blessing, too.

I’m a speed freak. Okay, blessing and curse somewhat. No, much more a blessing.

Knowing who you are and how you have to roll isn’t keeping score. But there’s more.

You also have to know what you’re afraid of. We all have a ton of fear! Life has absolutely been terrific at teaching me that fear is THE culprit that spoils success. It paralyzes people. It gives people an excuse. Tons of them. It stops us before we even get started. And it’s almost always tied to somebody. Somebody close to us. Somebody we love. Somebody who may love us. Or may just say they do.

Fear causes us to hide. It feels safe, but it’s deceptive. Dangerous. It lulls us into behavior that wrecks any opportunities we have to achieve, grow and reach a higher capacity for our lives. Fear is a nasty, ridiculously effective enemy.

Why then would we wrap it around our shoulders like a comforter on a bitterly cold night?

Because it feels good. Sorta like eating half a dozen glazed donuts. Or one of those 2000 plus calorie concrete ice cream shakes from Sonic.

Because it seems like we’re convincing ourselves that we’re protecting ourselves. Operative word is, “seems.” Looks are sometimes deceiving.

What has this got to do with figuring out what we have to give? Everything.

Let’s look at this from your perspective. You’re no different than the rest of us. You want to be special. You want to feel like you’re valuable. To somebody. In some way.

That can fuel narcissism, an unhealthy focus thinking you’re all that and more — where you’re diluted thinking you’re somehow more special than everybody else. So you live your life intent on showing us the movie that is your life feigning interest in others only so you can get more attention for yourself. It’s all about you when you’re narcissistic. Let’s not likely you because you’re not paying me, or anybody else much attention if you’re really that self-centered. Unless you think there’s something we can do to shine a brighter light on you. And my little light runs on two AA batteries so I’m no help at all. 😉

You’re special. But you’re no more special than me, or anybody else. Do you really think we all have value? That we all have the potential to bring value to the world, in some way? Come on, be honest! That’s the problem with unfair, harsh judgment and prejudice. This has nothing to do with the actual value provided because clearly there are people who don’t provide value. That doesn’t mean it’s impossible for them. It just means, for some reason, they choose not to deliver. They decided not to give. Maybe they decided they’d just focus on taking. Too busy doing that to give anything of value to others. It happens.

It’s why people grow discontented. And suffer envy. Jealousy. It’s why you get sucked into measuring yourself by what’s going on with other people. In spite of the truth that what’s going on with them has no bearing on you and your life. Unless you let it. Which is stupid.

Your neighbor pulls a brand new Tesla into their driveway. Suddenly, you and your Toyota feel inferior. Like a failure. Just another instance of the dangers of comparing yourself to anybody else. Their Tesla has nothing to do with you…but suddenly it does. Because you let it. We need to stop it. And it’s hard. Really hard for some of us.

I get it. I’ve been there. I’m a baby boomer. We grew up chasing and pursuing it hard.

You know what I love about minimalism, the tiny house movement and all the talk about frugal living? Because they’re congruent with how I really see the world. Chasing materialism goes against everything I believe. I don’t think there’s anything wrong with owning a Tesla, or a Bentley if that’s what you want. Just leave me alone if I don’t follow you down that path. ‘Cause those don’t matter one whit to me. I love the margin that affordability offers. Enter my admiration for those things like minimalism.

That may not feel good to you. That’s fine. Just don’t gauge my life by your measuring stick. And don’t expect me to gauge my life the way you may gauge yours.

It’s freedom. It’s a start toward lowering your fears, too.

Your lifestyle holds you hostage. You “need” so much money. Well, you think so. Because you’ve got stuff. Your stuff owns you. And man is that a rotten place to be. Crowded, too.

Focus on yourself. Stop focusing so much on yourself. It’s the paradox of contradiction. The zig and the zag. The Yin and the Yang.

Besides regret, what are you afraid of?

I’m afraid of losing people who matter to me. Because I know that’s likely as I grow older.

Most of us have people-based fears. We don’t want to disappoint somebody. We want somebody’s approval. Or respect. It’s likely our parents or a spouse. But honestly, it’s like your neighbor’s Tesla. It’s got nothing to do with you, but it’s also got everything to do with you. It’s YOU. Not them.

We get things wrong in our own head, which is why I’m so fascinated by our brains and our minds. New flash: what you think matters! We’ve talked about that quite a lot here inside The Yellow Studio. For good reason. What we think and what we believe changes things. Changes everything.

Back in episode 5001 – the first episode of this new iteration of LTW – I talked about a book that I hadn’t yet read, “Breaking the Habit of Being Yourself: How to Lose Your Mind and Create a New One,” by Dr. Joe Dispenza. Well, I started reading that book last week. When I’m finished I’ll do a show about what I learned so you can learn it, too. But I’m far enough into it to confirm what we all know is THE difference maker. How we think and what we believe.

It’s so fundamentally valuable because it determines our actions. And how long we’ll stay with something to make it work. It’s the linchpin to our success. In anything.

That matters because it’s at the heart of today’s topic, the question – What do you have to give?

You may think you have nothing. You may even believe that. Well, then you’re right. Not technically, but practically. First, you have to find value in yourself so you can determine where you can provide value to others.

For instance, there are many things I’ve learned about myself. Things that are natural, normal and feel just right for me. Because that’s how they are in my life, I can discount them and think, “That’s not so special.” Wrong.

Yesterday news broke that Lindsey Buckingham was quitting Fleetwood Mac. They’re planning a new tour. Depending on the news report you choose to believe, he quit or was fired. In his place will be two guys I really like. Mike Campbell of The Heartbreakers, Tom Petty’s band. And Tim Finn of Crowded House. Frankly, neither of them will be able to pull off being Lindsey Buckingham in my opinion, but that’s 3 guitar players who are all insanely good guitarists. Put a guitar in their hands and you get magic. Put a guitar in my hands and you’ve got a big bag of nothing!

But put me in touch with somebody who trusts me and is willing to share their troubles, and I’m a rockstar. I thrive on deep conversations. I love them. I love being a shoulder people can lean on. I don’t shy away from it. It’s who I am.

Just because you’re good at something…and it comes easily and naturally to you doesn’t mean it’s not valuable. You have to get past that kind of faulty thinking. Mike Campbell is a killer guitar player. According to Tom Petty, when he first met Mike it was clear Mike was a natural. So because he’s a natural and it’s easy for him we don’t think he’s good? Wrong. We all bow to his prowess. He’s terrific. You are, too — at something!

The crux of it is to figure that out. And to think of our contribution. What we have to give!

Magical things start happening. We get less focused on ourselves and more focused on others. We increase our gratitude for what we’ve got, growing less focused on what we lack. Our energy is elevated as we’re doing what feels right, and natural for us. The more we do it, the better it gets. The more expansive things become.

It doesn’t have to be some “save the planet” type deal. It just has to be “save the moment” type deals. I can spend an hour or more on the phone listening to somebody’s troubles and ask some questions along the way to provoke deeper thought – and hopefully to help provide greater clarity – and I’m foolish enough to think I’m going to change somebody’s life (that’d be wonderful if it happened). I am practical enough to know that I’m very likely changing a moment though — and that’s what I have to give. And I’m good with the bigness of that.

You just gave me quite a few moments. I hope I changed them in a positive way for you. That was my goal all along!