Randy Cantrell is the founder of Bula Network, LLC, a boutique coaching company specializing in peer groups to help people leverage the power of others. Visit the website at ThePowerOfOthers.com. 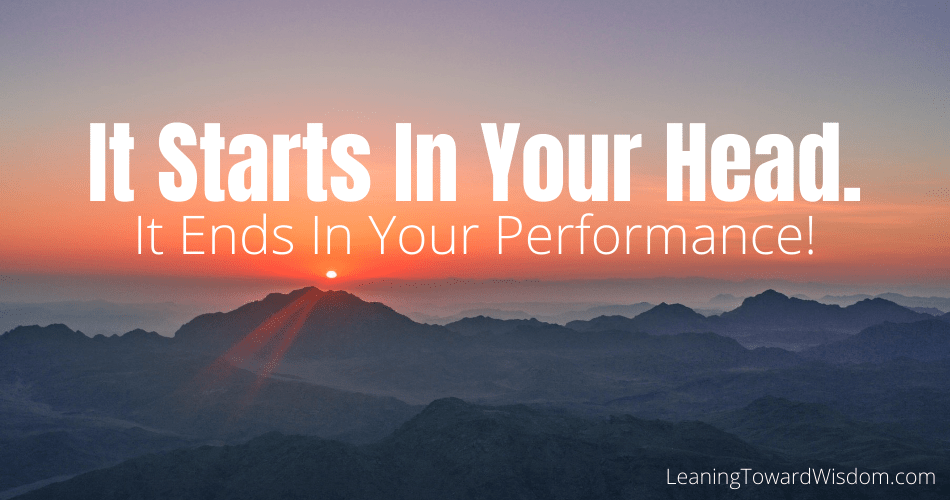 In 2018 I started imagining something I’d never imaged before. I imagined having a second home, someplace I could retreat to. I had lived my entire life never thinking such a thing. I remember a time in my youth having a tough time imagining living on my own. 😉

I didn’t have difficulty imagining…I just had never imagined having two residences, but for the past few years, I’ve mostly imagined that!

Before music, there were Matchbox cars. As a little boy, I collected Matchbox cars – back when they were realistic metal die-cast vehicles. Those were the days before Hot Wheels came out, those cartoonish brightly colored, but fast-moving plastic cars. I didn’t like them nearly as well. They weren’t realistic enough to suit me. Ironically, being realistic helped me imagine the small cities and streets I created on the sofa cushions as I maneuvered the Matchbox cars around. Matchbox got all my money as a little kid because with them I could create all kinds of things in my head.

Let’s talk about starting an ideal outcome in your head and ending it in your performance! 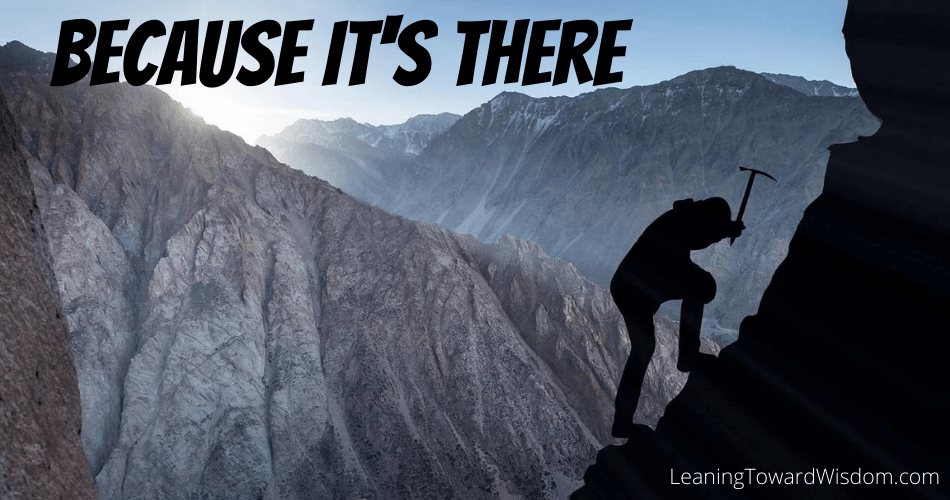 Why do people climb a mountain?

I don’t climb mountains. I barely climb ladders. Heights are not my friends. Never have been.

I’m among the many people who view mountain climbers with a degree of admiration and bewilderment. Mostly, I think they’re crazy. It would seem I have an aversion to death-defying feats. Yes, I’m weak. And afraid. #FradyCat

Even so, I can approach an escalator or long stairway and envision pulling some movie stunt of sliding down rather than taking the more pedestrian way down. Why? Because it’s there. Like a curb or ramp, we’d always take while riding our bikes. I mean, it’s there. I’m there. So why not, right? Meant to be.

Life is filled with such things.

Mud puddles that need to be stomped.

Snow that needs to be thrown in balls.

Ramps that must be jumped.

Basketballs that must be shot at a hoop. Or trash that must be wadded up and thrown from across the room for a proverbial 3-point shot buzzer-beater.

Because it’s there. And somebody must do it.

Okay, I get that there’s a huge difference in the north face of the Eiger and throwing a balled-up piece of trash into a trash can 20 feet away.

Let’s see if we can figure it out. Or not.

He is Frank Watkinson, YouTube star. Frank and I first recorded for episode 4 of this year (2021). That was back on February 7, 2021. Today’s conversation happened on Monday, December 20, 2021 – the same day Frank released this song, an original (see the video below).

You’re sure to enjoy today’s conversation. Happy Holidays to you and yours. Lord willing, I’ll be back in 2022.

P.S. Frank, I don’t think you look anything like Tony Robinson.

DO YOU WANT TO BE EXHAUSTING OR WOULD YOU RATHER PEOPLE GAIN ENERGY BY BEING AROUND YOU?

Coaching people to engage in proper behavior depending on the situation – reading the room – is growing. Likely because it’s difficult for many people. Theories abound that it has to do with when a person was born and the world they grew up in. I’ll subscribe to that notion. After all, you must realize that people entering the workforce today never lived in a world without the Internet and some form of social media. And they never lived in a world without texting and smartphones. It’s bound to have an impact.

However, my work sometimes involves people in their 40s and 50s. So what do you say to that?

I’m still trying to figure it out and help my clients do the same. This much I know. People who handle most conversations by trying to inject humor with a joking demeanor are self-focused. 100% of the time I’ve found these folks are poor listeners and either clamoring for more spotlight OR they’re uncomfortable and masking that discomfort by trying to be funny.

Sadly, they fail to understand how exhausting that is for the rest of the room. And how damaging it is to how they’re perceived as unable to take anything seriously. It’s not about being grave and not having a good time. It’s being able to harness our ability to know when it’s helpful to be one and avoid being the other. Time and place matter.

There’s a time for levity. There’s a time for a sober demeanor. It’s why my “progression of leadership” was born many years ago. Humility is the foundation of the progression. Without that, there’s no progression. Following humility is curiosity – which fosters more listening than talking (enter the person who is always intent on trumping your story). Curiosity is followed by knowledge. Those who ask questions learn things they didn’t know before. Then comes understanding. That knowledge helps us now understand more (better). Then, the entire progress culminates in compassion, which is simply defined as “a focus on others.”

And there you have it. The heart of the problem. Those who only engage in levity – or those intending to insert levity at every opportunity (including those inopportune moments) are focused on themselves. They’re not thinking about you or the conversation or the situation.

Leaning toward wisdom is mostly our effort to lean further away from our own foolishness. And to know when we’ve behaving foolishly. 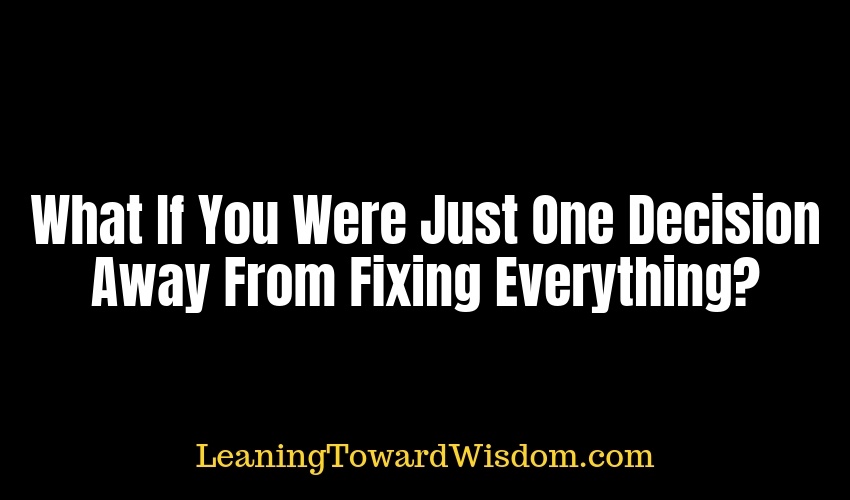 It’s a very big question. And I may have misworded it. The last part at least. Maybe it’s not about fixing everything. Maybe it’s about making a big change – the one you most want to make. But I decided to go as big as I could with it. Mission accomplished I think.

What if you were just one decision away from fixing everything?

It’s not easy stuff. Highly uncomfortable. But worth it. The pressure to improve is more attractive to some than others.

I live in Dallas/Ft. Worth, but I’m an avid OU Sooner fan. I was traveling back home from a Thanksgiving trip when social media began reporting that OU football coach Lincoln Riley might be leaving Norman, Oklahoma heading to the University of Southern California. Riley had been a fixture in Norman for about 7 years, 5 of them as the head coach.

A week passed as Sooner fans anxiously waited to see who the next football coach would be. In the meanwhile, we were all pleased that Bob Stoops agreed to be the interim coach, willing to take the team to play Oregon in the Alamo Bowl.

Saturday evening, following the conference championship games, news began to spread fast that Brent Venables, D coordinator for Clemson for the past decade, and previous member of Bob Stoops’ coaching staff, would be named the next OU football coach. Just about every fan suspected as much almost as soon as Lincoln Riley fled Norman.

You’re not alright as you are!

You can be better. So can I.

That doesn’t mean we berate ourselves. Or discount our value and worth. It just means we’ve still got work to do today. Then tomorrow, we’ll have yet more work to do. And the day after that, and after that. Until we die. Until we run out of days.

The potential future is the hope or the despair that afflicts us all.

Reflexive empathy is when you see someone experiencing emotional or physical trauma and you ‘feel their pain’ and will have a desire to relieve their suffering. But you can’t help everybody. And you can’t help just anybody. Sometimes you’re just not the right person for the task. It takes experience and wisdom to figure that out.

I’ve gone on record that in my dozen years of professional coaching, I’ve had ONE person who I wasn’t able to help because he just wouldn’t let me. Closed off. Non-responsive. Non-communicative. Guarded. And over time I realized he was that way with everybody. Does that mean nobody can help him? I don’t know, but I know I couldn’t. Then again, life isn’t over so I may never know if I helped him or not. But I can now live with it because it’s not my life – it’s his.

I know this much…there is only one person I can help, guaranteed. Me! The man in the mirror must be the number one candidate I try to help improve.

What if we’re just one decision away from fixing everything?

What if we’re just one decision away from wrecking everything?