Jackson Browne is among my all-time favorite singer/songwriters. Saturate Before Using, his 1972 album is all it took. But that was just the beginning. Two years later, 1974 brought us Late For The Sky, a record I’ll consistently put into my top 3 albums. While his politics aren’t my cup of tea, his talent sure is! Today’s title is a snippet from track 1 of his latest album, Downhill From Everywhere – “Still Looking For Something.” The entire line is indicative of his creativity.

And I knew since I was just little
The sharp edges of the world will whittle
Your dreams down to shavings at your feet
Gonna do my best not to settle
I know it’s gonna test my mettle
Keep my options open, even so I’m hoping

The sharp edges of the world will whittle your dreams down to shavings at your feet.

Will we do our best not to settle? Good question.

Some days you eat the bear, some days the bear eats you. In 1974 I first saw that saying as an album cover by Ian Matthews while visiting Leisure Landing, my favorite record just outside the gates of LSU. Simply put, sometimes you win…sometimes you lose.

That’s how the sharp edges of the world happen. Sometimes you avoid them. Sometimes you don’t. I think Jackson is right though. Mostly, they whittle away. At our dreams and just about everything else we seek. Especially if we don’t fight back. Hard. Every day.

But there are some other parts of the world that aren’t sharp edges. There are some rather pleasant areas of the world that don’t whittle. They foster growth, resilience, and change. Truth be told, the sharp edges that can whittle can also serve to provide those valuable things for us if we’ll leverage them properly. Struggles and sorrows often define us. Much more so than the joyful moments.

It’s not just for college football players. Or their coaches. It’s true for each of us. We need to remember how we feel when we don’t have success. And there’s little doubt that the most valuable lessons are those taught to us by failure.

Two things – the sharp edges of the world that whittle away our dreams and our response to that reality.

Sharp edges are events and circumstances, sometimes the ones resulting from our own behavior, sometimes not. Sharp edges are also people. The people who hate us, who give us no consideration, who show us no compassion, who judge us harshly. So sharp edges might be anything from health concerns, to financial troubles, to grief, to sadness, to sorrow, to struggles of any kind. And they might also be the people who don’t have our best interests at heart. Those folks who aren’t interested in helping us, but would prefer to hurt us.

Whoever you are, wherever you live – you experience both forms of sharp edges of the world. There is no vaccination. Nobody has antibodies that will protect them from such things.

No need to enumerate all the ways the world cuts us with sharp edges. We can all prove that truth with our own lives. Our struggles are real. We don’t often intentionally go looking for the sharp edges. Mostly, we run into them. Or they run into us. But years ago I was reading about various hustlers and con men who start each day at zero, then work like fiends during the day to score big – to get as much money as they can – only to end the day back at zero. These folks are different than most (thankfully). They go out each day looking for the sharp edges, willing to end their day cut to pieces, but only after doing some cutting of their own. These folks refuse to live conventional, responsible lives. Mostly fueled by selfishness and bad habits, they’re enterprising predators who seem hooked on the adrenaline of the sharp edges of the world. Life on the edge makes no allowances for accepting something more mundane.

They’re the sole example that I can think of where the notion could be put forth that the sharp edges of the world don’t whittle away their dreams. But it seems to me that’s exactly what happens, even with these folks. They’re chasing something they’ll never catch. Maybe they even realize it, but they don’t care. It’s not about catching anything, but it’s more about pursuing – and doing it the way they want. Bad behavior is its own reward. Never mind who gets hurt. Never mind if it results in a wasted life. The point is to do what you want as often as possible without regard to anybody else. Judge it as you will. Me? Based on my Christian beliefs, it’s a wasted life where the sharp edges of the world do even more harm than it does to those of us willing to battle our own self-centeredness. Temperance is a benefit.

I’m going out on a limb and assuming anybody listening to me here isn’t heading into the sharp edges of the world because you’re thrilled by it. But if you are, I’d be interested in speaking with you to learn more. It’s a way of life I just can’t understand.

What I do understand – more fully than ever before now that I’m old – is how the sharp edges of the world don’t just beat us down but whittle away at our dreams and our reality. If Jackson’s lyrics were 100% accurate, that dreams were the only fatality of the sharp edges, then that’d be bad enough. But there’s more casualties – reality. Mostly, because we allow it. Not because the sharp edges have more power, but because we give them even more power.

The irony is that those hustlers living by their wits every day, searching for sharp edges, are living a reality of their own making. But so are we – those of us choosing a different path. A more responsible path. A more compassionate path. We’re forming our own reality based on our experiences with the sharp edges. For example, there are times we believe their sharper and more deadly than they really are. And there are times when they seem fatal, but they’re not. Conversely, there are times they don’t seem fatal, but they are. It can be hard to tell.

So much of our lives are choice – how we choose or prefer to see things. What we choose to think, feel and do. The sharp edges of the world aren’t any different except in how we choose to see them. You’ve likely seen many memes like this one… 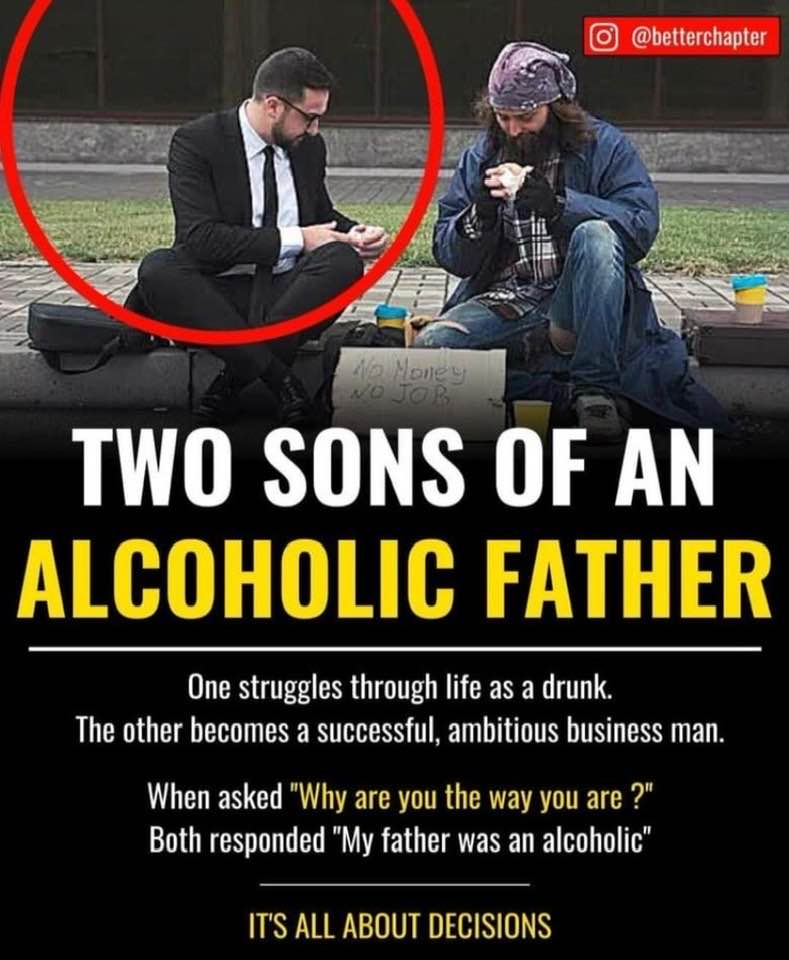 It’s true. It is all about decisions. But decisions are made based on how we see the world and our place in it.

Hero or victim. Those are the two binary choices I concentrate on because it seems to me there’s no middle ground. We’re either a hero or a victim, or on our way to one or the other. We’re either blaming or taking responsibility. Blamers are victims. Heroes take responsibility.

Compassion and empathy compel me to understand that sharp edges aren’t created equally. Some are way more dangerous – sharper – than others. While the Harbaugh football family mantra is, “Who’s got it better than us? NOBODY” — I know there are families who have a very different mantra but I love the Harbaugh family outlook.

Why did papa Harbaugh roll that way when so many others choose to lament what they don’t have? I don’t know, but I know this – he had a choice in how to raise his kids and lead his family. He choose to see life the way he did and he taught his kids to do the same. Here’s some quotes from an article Jim Harbaugh wrote for The Players’ Tribune on February 1, 2016. He’s the head football coach for the University of Michigan.

I shared a room with my brother for 16 years, and my dad always made us feel like that was the greatest thing in the world. Like we had this whole house, and my brother and I had a special piece of it all to ourselves. Never mind the fact that most kids wanted (and a lot of kids had) their own rooms. We were lucky to share a room. We got to share each other’s stories, each other’s dreams.

“Who’s got it better than you guys?!”

That’s how it was in our house. A lot of excitement. A lot of competition. A lot of love.

Later on we realized, Okay, maybe some people did have it better … But my parents were right about just about everything. It’s staggering how right they were. Maybe having an exciting childhood in a loving home is as good as it gets. And we had that. So how could anybody have it better?

How indeed? All by making a choice of how we’re going to see the sharp edges of the world and protect ourselves from letting them whittle away our dreams. Choosing instead, to let them forge us into people filled with gratitude, determination, and resilience.

Life may be less about trying to dodge the sharp edges of the world – except those we’re responsible for creating due to our own foolishness – and it may be more about knowing that’ll bite us every now and again, but facing them with the thankfulness that things are as well with us as they are, however, well they may be. Thankfulness and gratitude are always the paths forward. Coupled with competing daily to make sure the sharp edges don’t win, but strengthen us so we can!