Before you click play on the episode click play on this music video from Iceland’s best kept musical secret, Kaleo. I’ve spent hours with these gents playing in my headphones whilst walking about in the middle of the night, or in the early morning hours. They’re terrific.

I like them so much I bought their latest record – Surface Sounds – twice! Intentionally. Well, I pre-ordered it on Apple iTunes and was able to download a couple of songs that were released early. This was early last year. Then the release date on the record kept moving back. And back. Hello, COVID Pandemic. Then the album was released, but Apple iTunes didn’t let me download the other songs. So I Googled to troubleshoot Apple iTunes and followed at least 3 things suggested to fix such a problem. Nothing worked. In time I gave up and just hit the buy button again. Two weeks after the second purchase I got an email from Apple iTunes (see below). 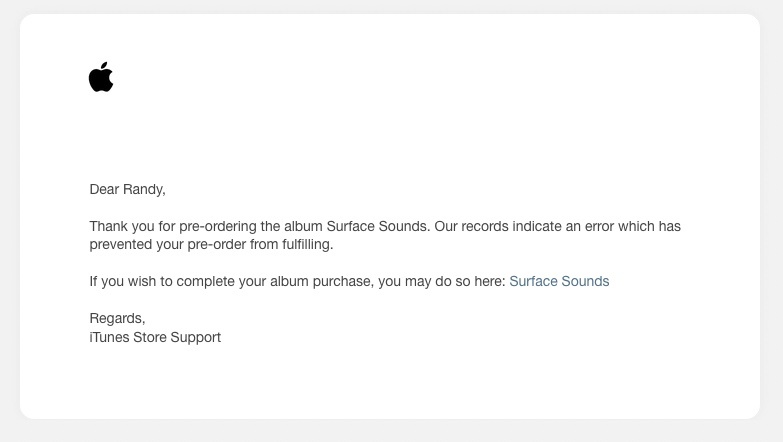 So I bought the album twice but got it once. Maybe it’ll put a few extra pennies into the pocket of the band. Thanks, Apple Music (I still call it Apple iTunes). Did I tell you I’ve been a devoted Apple user since the first Mac in 1984? Well, it’s true. But even I lack the skills to know how to contact Apple about the aforementioned customer challenge. Such is life in 2021, right?

But I digress from the main point of today’s special episode – yes, that’s two special episodes in a row. Special because it wasn’t planned. Instead, it’s spontaneous. But I rather enjoy a good bout of spontaneity at times.

That song, “I Want More,” rang in my ears and played in an endless loop for days. It sounds selfish, but it isn’t. Not really. It’s ambitious. It’s restful. It’s like a favorite place of mine. A place where you go to just exhale. And feel better. But where you can’t quite get enough. Leaving you wanting more. And more. Because it’s so highly valuable. A place where your arrival causes you to sigh with relief. Where the weight is lifted away.

A place where less is more. 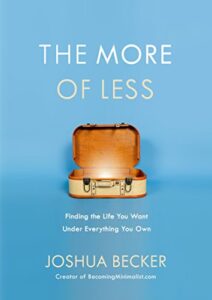 There are gobs of books about less being more. Some are business-related. Others are about health and fitness. Some are about stuff and lifestyle, like the one published in 2016 by noted minimalist Joshua Becker, The More of Less: Finding the Life You Want Under Everything You Own.

Another famous minimalist Leo Babauta wrote The Power of Less: The Fine Art of Limiting Yourself to the Essential…in Business and in Life in 2009. That was my first foray into the idea, meaning…it was my first deep dive into learning more about minimalism and why folks became converts of that way of life.

But in 2006 I had already been influenced a bit by John Maeda, author of The Laws of Simplicity (Simplicity: Design, Technology, Business, Life). Maeda is an MIT-educated tech brainiac. My lifelong devotion to my own lack of brainpower had forced me to simplify things. Part laziness. Part stupidity. I had a lifelong history of searching for simplicity in 2006 when I bought the book. I still have that passion – a relentless pursuit of straight-forward and simple. 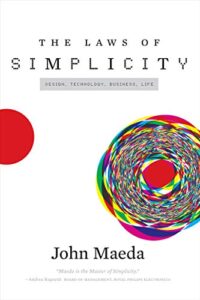 I had to learn the hard way that simplifying things is hard, hard work. Sometimes my laziness doesn’t pay quite like I expected. No matter…I still found it worthwhile. So much so that I continue to do it. Every single day.

Beginning with your physical surroundings.

I wish I had, but I didn’t. My quest for more by leaning toward less first erupted in my career. Business pursuits. Business is challenging enough. There’s no need to complicate it further. So I figured. So I still figure. Experience has confirmed my youthful yearnings for simplicity.

And one of the first things I learned as a young business leader was the power of beginning with your physical surroundings. It was intuitive for me because I was the child unable to sleep in a cluttered room. Toys and stuff had to be put away or I couldn’t go to bed. But I wasn’t a kid plagued with OCD-type behaviors. I just didn’t like clutter. And I also wanted my things to be in place. I was the kid who didn’t want my toys wrecked or destroyed. I took pretty good care of my toys. It always felt like natural wiring to me because even though my mother exercised military-like discipline for cleanliness and order, I was oriented to keeping my space orderly because it’s how I wanted things.

Years later, in my 20’s, during my first business leadership role where I was bequeathed with number 1 responsibilities, I began with physical order. It would be my habit at every leadership stop I’d make. I called it exactly what it is, house cleaning. Except the place was a business, not a house. It was always positively powerful. People were energized and there was always an elevation in pride when the clutter and filth was fixed. It was further proof for me that people benefit greatly for simplicity and less. Less is more. And I wanted more.

I still want more. Of less.

But the physical surroundings continue to be a challenge. Age does that, I think. The longer you live the more moss you gather. That rolling stone metaphor isn’t exactly accurate. Go into any old person’s home and you’ll likely see more clutter than people much younger. Stuff piled upon more stuff. And I’m not talking about hoarding. I’m talking about the accumulation of stuff, piled on year after year. I chuckle whenever I look at real estate photos of homes for sale by older owners. The nicknacks and clutter are sometimes remarkably dominating. I’ve got a lifelong fascination with the folks who enjoy having their front yard decorated with clutter. I’m not talking about trash and junk, per se. I’m talking about those folks who have pink flamingos, bird feeders, birdbaths, hanging baskets filled with ferns, yard gnomes and all sorts of “hey, this will look good here” stuff. My fascination is with the mind that thinks it’s becoming and contributes to make their place a showplace. (They’re showplaces alright…”Hey, let me show you a place!”)

Thankfully, my front yard isn’t cluttered with ornaments, bird feeders, gnomes, and more, but the sheer volume of stuff that I have is…well, ridiculous! I need to schedule and perform a “house cleaning.” I want more so I need to ditch some things. A lot of things. Because I want more. And I’m convinced having less is just one way forward toward that objective.

A challenge with figuring it out is how much of a moving target it is. It takes time. We have to sit with things for a while. It’s like stirring up water when you walk through a creek bed. Only by standing still can you let things settle so the water becomes clear again. But we all know standing still isn’t a good strategy for progress, growth and improvement.

There’s another element to figuring out the ideal outcome, too. Holding a thought for a while to make sure it’s your ideal outcome. I’m not naturally impulsive, but if I were, it would be offset by my urge to ponder and live with an outcome in my mind. Since I was a little boy I’ve considered consequences and worked to weigh the pluses and minuses. Doesn’t mean I always got it right! 😉

What’s the ideal outcome? For me, it’s not a question to be answered quickly. Sometimes I need to do more research. Almost always I need to think it through by putting myself in the situation where that outcome is realized. It’s imaginary of course, but still…it gives me the feeling I might have if it became true. Wrestling down the feeling – the psychology of it – is valuable. I’m increasingly interested in our mental health, my wife and I.

The circle of trust in Meet The Parents is kinda-sorta real. We all have them. Here’s mine. 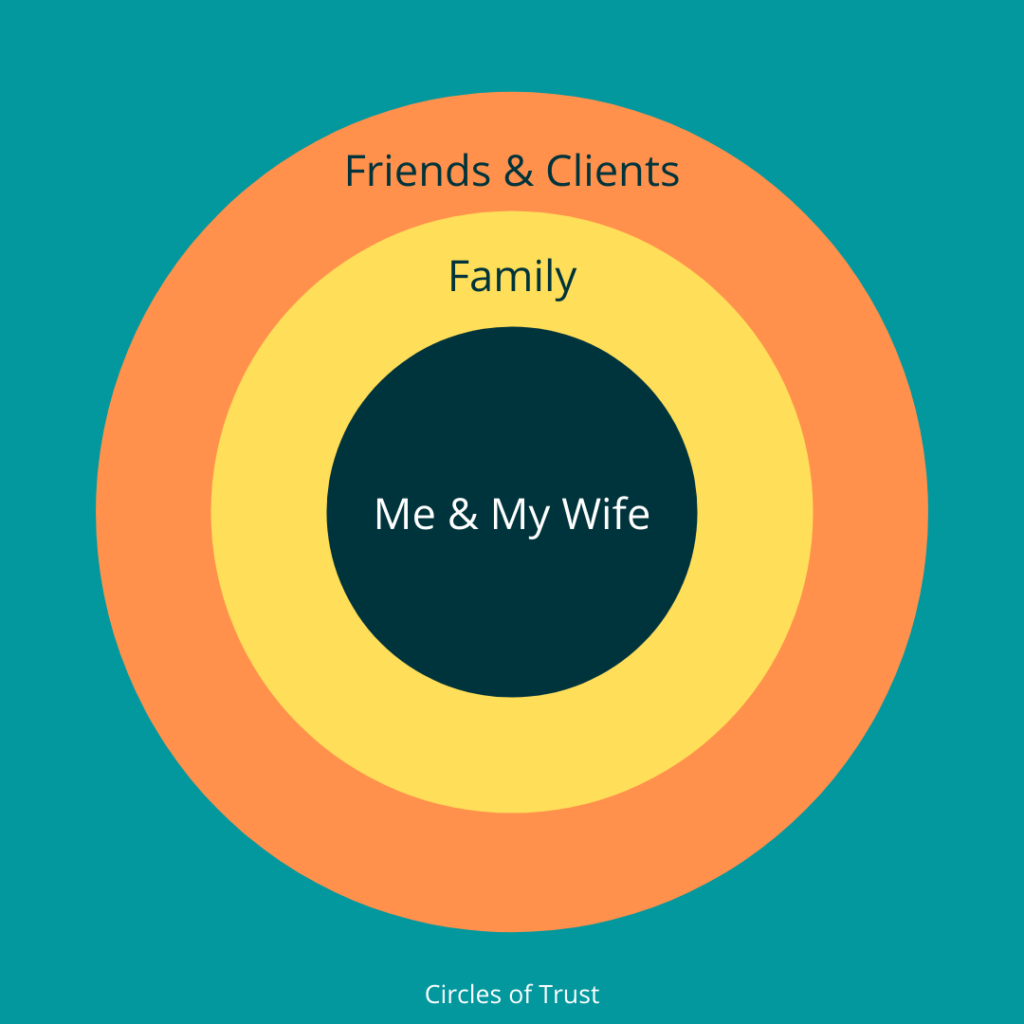 My circle is shrinking, but not due to paranoia. Age and experience tend to show all of us how difficult it is to truly lean on people. When we’re children we trust almost everybody. Then we learn that’s a bad idea. As we learn to discriminate in choosing our friends we find sometimes people don’t mean well. Others prove themselves untrustworthy. So we thin the herd as we grow older. Think about the broad population of friends when you’re in elementary school and how narrowed down it is by the time you emerge from college. And there are practical reasons for it, too. Like proximity. And seeing people less frequently. Sometimes we just grow apart because we make choices in our life and they make different choices that steer us further away from each other instead of closer to each other. It happens. Not always because of betrayal or anything sinister.

Then there are the betrayals. We’ve all been betrayed and likely we’ve all been guilty of betraying. It may be intentional and selfish. It may be completely innocent and unintended. Every human knows the feeling. Good friends work through it and come out the other side. But sometimes, it ends the relationship and things are never the same. So it goes.

By the time I reached 50, I made a conscious decision to populate my circles of trust with fewer people. For me, it meant devoting more time to fewer people. I wanted more and figured that the path forward (for me) was by having less. Fewer people meant I could be more devoted. I wasn’t driven by what I’d get or how I might gain. I was focused on viewing myself as a resource – a finite resource. And because I’m just not that talented or good, I knew with whatever time I had left I needed to serve the people who mattered most – the people who, for whatever reason, found value in my presence.

Wanting more by having less comes to life for me more and more almost daily. Within the past decade, I’ve learned so much. About myself. About others. About life. About death. And all the stuff in between.