The first real studio tour I did Inside The Yellow Studio was more than a decade in. It was 2015. At that point, I’d been laying down audio tracks online for years. Then when you guys helped me get the new (at the time) Rode Rodecaster Pro in 2019, I did a new tour. Click here to see and listen to that.

I won’t rehash history because you can go back and dive as deeply as you’d like. Or not all at.

The broadcast workflow has always been how I’ve rolled. That is, I prepare in advance, then I hit RECORD, and mostly, I’m done. It’s finished. My editing is pre-recording editing. It’s a broadcast workflow because that’s how live broadcasts work. There are no do-overs. It’s out and done. Foibles and all.

That workflow was the genesis of The Yellow Studio version 1.0. It consisted of a sizable rack of gear, which I loved. It wasn’t cheap, but my sound was consistently great – whether I was on a Skype call or recording an audio or video. Because all the sound was produced in real-time through all the hardware I had. Software is a much cheaper route to go, but you have to incorporate a recording workflow, not a broadcast one. That means, you record, then you process the file and fool with things after-the-fact. No thanks!

In 2019 the Rodecaster Pro ushered in The Yellow Studio Version 2.0. I ditched the full rack of equipment, replacing every bit of it with one device – the Rode Rodecaster Pro. It was a big shift – and improvement in the signal chain. Not just because the Rodecaster Pro is such a great device, but because all the cabling changed and became very straightforward. Now I was able to use shorter run XLR cables directly from the microphones to the Rode. No more going into the vocal strip (mic preamps), then into another processor, then into an interface…gone was the spaghetti of wires Inside The Yellow Studio. It was wonderful and the studio became so much nicer for me! Thanks to many of you who contributed money to help me buy the Rode!

The Yellow Studio is soon going to go away. Well, more accurately, Version 2.0 is going away. Not because of the new Rodecaster Pro 2, which I hope to get soon, but because I’m physically moving. Yep, moving! Lord willing, Rhonda and I will be finding some new digs where I’ll have to erect The Yellow Studio Version 3.0. I can’t yet tell you the details because I don’t know them, but I’ll figure it out.

Lord willing, The Yellow Studio Version 3.0 will include the new Rode Rodecaster Pro 2, but we’ll see how it goes. Otherwise, I have no other hardware changes planned. At some point, I’ll migrate to an Apple laptop and give up the 27″ Apple iMac (circa 2017). I’ll keep a big monitor, but I’m going to shift to greater mobility so a laptop will be vital.

Some Things That Will Be Different In Version 3.0

The Yellow Studio Versions 1.0 and 2.0 had eight (8) bookcases full of books. And knick-knacks. Oh, the knick-knacks will remain! 😉 Let it never be said I didn’t have my priorities straight.

About 4 of those bookcases were filled with religious or “church” books. Bible commentaries and other books that I’ve spent my life collecting. And reading and studying. In my now “not so famous” document, When I Die…I had always written down that my son would get the entire library. Well, in my efforts to purge about 80% of my personal possessions, I asked him if he wanted them now. I only had 2 requests: a) make sure our immediate family, including the grandkids, have access to them and b) that includes me! He agreed so he’ll be getting about half of the books. The other half of the library consists of secular books, mostly business and biographies. I plan to keep about 3 shelves of those and donate all the rest!

My life hasn’t had this few books since I was a teenager. But I don’t mind. It’s quite liberating actually. I’ve already worked through the emotions and depression about it. 😉

My collection of more than 3,000 CDs isn’t going away, but gone are all the jewel boxes. That saved a bunch of space. Now, I’ll insert the Cds and their inserted paperwork into binders (yep, it’ll take over 8 of those big 400-capacity binders, but it’s still far less space than keeping them the way I did in Versions 1.0 and 2.0). I’ve already ripped most of them onto an external hard drive, and backed up that onto another external hard drive. But like the books – which were always within eyesight – they’ll be out of sight now!

Those are the biggest changes The newest iteration of The Yellow Studio will be cleaner, neater and more pristine. That’s a good thing.

Some Things That Will Remain The Same

Actually, I’m hoping to elevate that Inside The Yellow Studio Version 3.0. Time will tell. Mostly, you’ll be able to tell if I’m able to pull that off. Or not. Talent is the limitation here – and always has been. But let it never be said I let little things prevent me from trying.

I won’t bore you with the details of the effort, but I will tell you that all kidding aside – I’m quite serious about improving. One of my greatest frustrations is being tethered to people who lack the desire or discipline to take growth seriously. I don’t mind a lack of talent because I’ve lived with that my entire life, but I do mind a lack of desire, effort, and preparation. Age is making it worse, too because I have to work harder and harder as I get older. And the returns seem marginal, but the alternative is depressing. Complacency. Apathy. Sameness.

Simon Sinek didn’t invent the question, “Why?” He’s plenty smart. And clever, but humans have been wrestling with the question since being expelled from the Garden sometime after Creation. But admittedly, that’s the big picture of purpose that answers, “Why am I here? Why are any of us here?” According to Isaiah 43:1–7, we were created for God’s glory.

But there are countless other purposes – much smaller ones – along the way. For this conversation, we’re talking about the purpose of the podcasts produced inside The Yellow Studio -my purpose is to create meaningful content that’s valuable to YOU.

I can answer it with a single word. Mostly.

I don’t mean some haughty endeavor thinking what I have to say is so important others should hang onto every word. Rather, it’s about passing it on. It’s about sharing, being open, vulnerable and honest. It’s about sharing experiences, insights, failures, successes and whatever stories of truth I’m able to share so others might benefit. I leave it to the individual listener to figure out if and how the content can benefit them. My aim is to help you do that. Only you can determine if my aim is true.

I’m not sure what will become of The Yellow Studio Version 2.0, but it now falls into the hands of new ownership. I suspect it’ll become what it once was many years ago – another bedroom. Or office space. But I really don’t know. And without being hateful, I can honestly say, I don’t care what happens because the room I dubbed The Yellow Studio was part of my experience, my life, and now my past. It belongs to me and by extension, all of you.

What began as a room with walls painted yellow morphed into a way of thinking, a way of crafting stories, a way of communicating. The Yellow Studio is uniquely my invention. It began with Version 1.0, then became Version 2.0. Not many versions for such a long time – over 20 years. So it’s time me and The Yellow Studio go through another reinvention. A metamorphosis.

I sat here inside The Yellow Studio for more hours than perhaps any other room in my life. Wee hour mornings spent with headphones on and tunes playing. Writing. Jotting down ideas. Intently listening to lyrics. Always looking for a spark, a point of ignition for the inspiration necessary to carry ideas forward by sharing them. To say goodbye isn’t easy, but it’s necessary. And it’d be very hard if The Yellow Studio were coming to an end, but it’s not. Only the current version is ending…so a new version can be born.

P.S. Happy Birthday to Cale, a man who has become like a second son. He turns 41 today and is quite the dad to the two oldest grandsons. They’re the 3 amigos in every way. And I’d be hard-pressed to be more proud. FYI, he’s the one in the beard and glasses. 😉 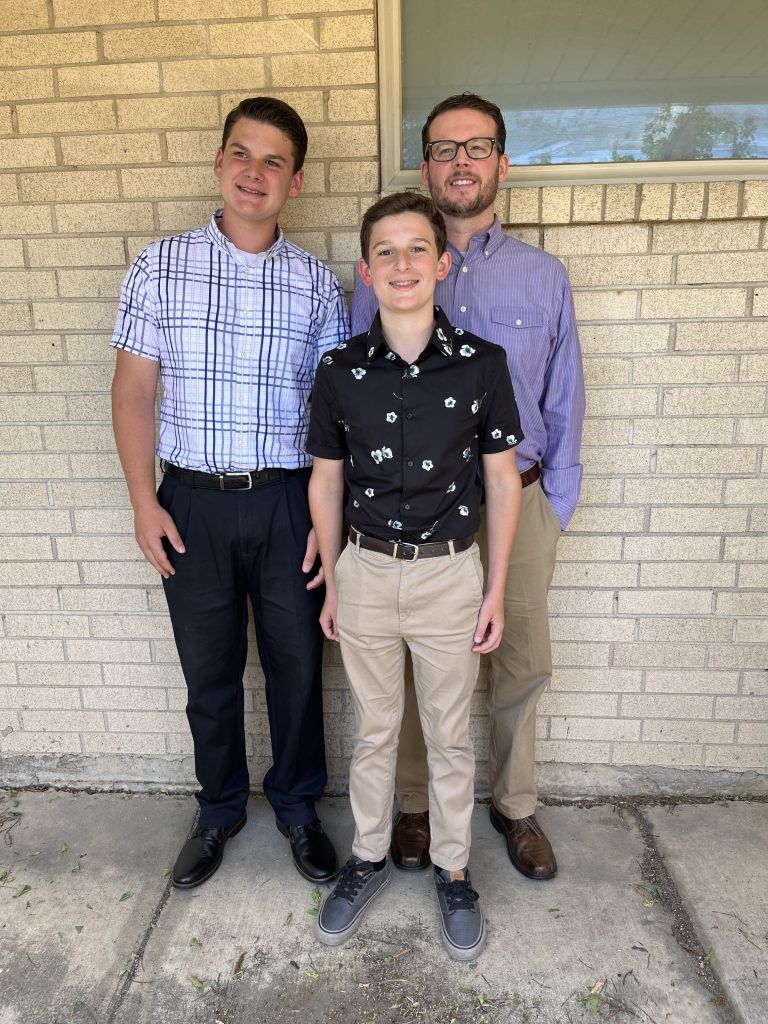